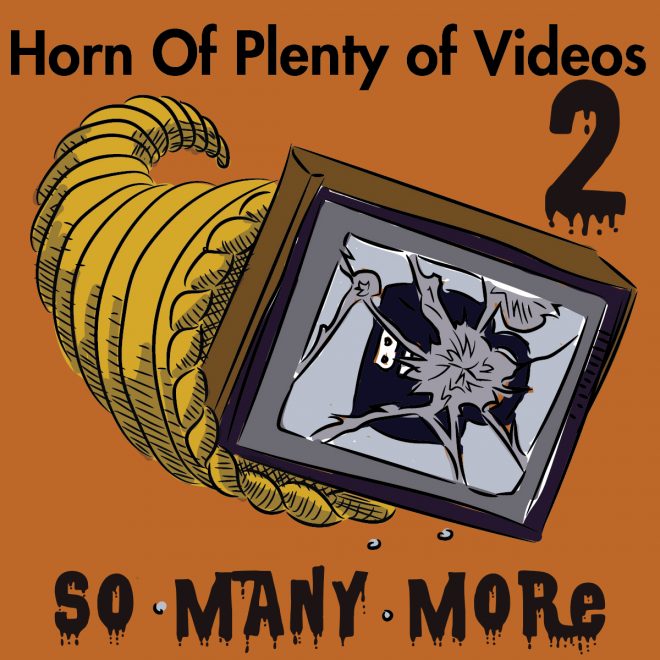 Holy moly. This is one overflowing blog post. Last week we took time to pay tribute to the many BRM songs that have been lovingly placed into this season of You’re The Worst. Before that we had a big web update. Before that? Well, I’m not here to run down what all of our blog posts were, that’s what the “more posts” button is for. But suffice it to say, we are way behind on sharing videos. So far, in fact, that I quickly slapped some sequel lettering onto blog artwork from a few weeks ago and christened this post Horn Of Plenty Of Videos 2: So Many More. Besides, it kind of works seeing as how next week is Thanksgiving. Wait. Really? How in the hell did that happen? My god 2016, is there anything you can do right? Well, I guess you can at least release killer tunes. But that’s about it, eh? If you’re inclined to enjoy this heaping help of jams in a different way, we Spotified it for you. Here’s a playlist. If you are so inclined, check ‘em out here. I’ll try to come up with a few more “jokes” if I can…
Let’s start things off weird with the strangely danceable “Guinea Pig” from Spiked Punch’s debut 7”.
Thrill Jockey has released the first song from the upcoming Emptyset album. “Borders” is, in a word, intense. In two words? Ok. Very intense.
As part of Polyvinyl’s 20th Anniversary this year, they had a bunch of their artists cover a bunch of their artists. This time around, check out the always innovative Wampire doing a Shoegaze-y/Steely Dan-esque cover of “Face To Face” by Jacco Gardner
Lost Under Heaven videos sure have come to mean epic, emotional rides. This timely new video for “Lament” is exactly that.
The hazy, feel-good psych-pop of Quilt is gonna blow your mind with their new video for “Eliot St.”
A particularly moving video from Nils Bech is up next. At least, as long as you don’t have a problem with hot glue guns. They remind me of a particularly bad Boy Scouts burn I received as a child, so that part was tough. For me, at least. You’ll be fine.
If my count is correct, this is the 4th video from the new Weyes Blood LP. Frankly, I’d be happy if she released a video every day. That new record is a personal fav of mine. Can’t. Stop. Listening.
This STRFKR track is a scant minute, but I sure do love that synth.
I just looked ahead. We still have 8 songs left to discuss. I better pick up the pace. If there is such a thing as a free jazz noise metal band, Radian is it.
I’d sure be happy to have a care-free summer day as a little kid again…
Man oh man, if you aren’t all over Thalia Zedek’s new band E, you should correct that now.
Papa M’s sludge-y metal sounds are really scratching an itch I didn’t even know I had.
Lose yourself in the tectonic shifts of the new Sybarite jam “Cicada.”
A haunting live performance from Sasha Siem’s birdcentric new album.
Look at me, sneaking in a super-fun new Fred Thomas tune at the end. If this tune is any indication of the new album’s greatness (it is) then we all have something to look forward to (we do).
Like I sad. Lots of tunes, right? Hope you enjoyed. Talk to you after the holiday.
~John
View All News
keep2porn.net shemale777.com vrpornx.net