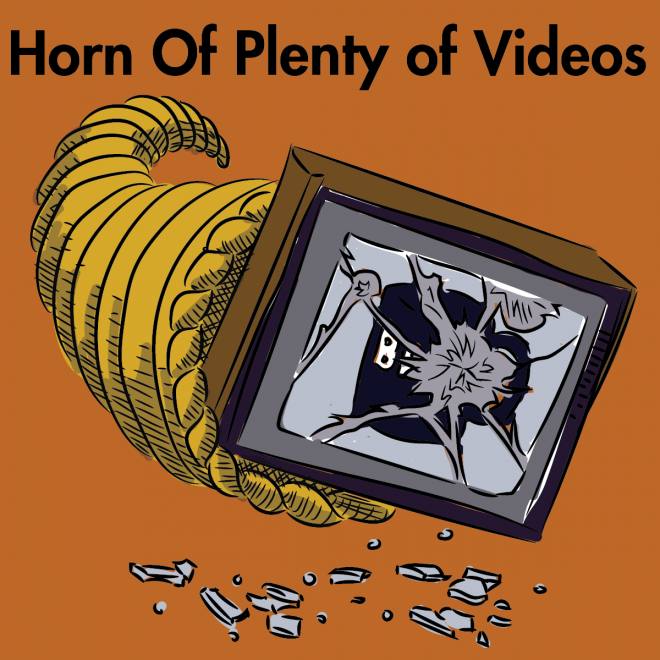 Boy oh boy. You take one week off from sharing videos for a Web Update, and next thing you know you have 13 videos (plus one [official audio] track) to share with your loyal listening audience. 13! Woah. Besides being the luckiest of numbers (triskadekaphobia? Nah… Though that would likely make a good title for bro blog record.) I feel like I barely have time here to work in some “jokes” (and no, this isn’t just a cheap way to get out of writing “jokes” because I’m not feeling particularly “funny” today or anything…). So let’s dig right in to this cornucopia of audio/visual treats.

Before we dig into the videos proper, I have that one aforementioned [official audio] track to share. If you haven’t heard Katy Goodman and the rest of La Sera‘s absolutely tear through Led Zeppelin’s classic, “Whole Lotta Love,” then you need to remedy that fact immediately. #sogood

The gloomy rock of Pill on this “Dead Boys” track is just the kind of thing I love to hear as it starts to get chilly outside. Well, that and acoustic jazz. Spoiler alert: there is no acoustic jazz in this week’s blog.

I’m completely obsessed with this debut from Sneaks. Seriously. I can’t stop listening. So this video could have been the worst and I would love it. Is it the worst? No, it’s crazy animation, which is a personal fav.

If you haven’t had a chance to see Charlie Faye & The Fayettes live yet, then this clip from AmericanaFest 2016 is next to the next best thing. Wait, then what’s the next best thing? I guess watching this with a new fangled VR headset, right? Or maybe just get your face really close to whatever device you are about to watch this performance on.

Look, you know this new STRFKR record is gonna rock your socks right off your tootsies, so you might as well get acclimated to cold feet with this fantastic sci-fi redux of Two Lane Blacktop video-ok, its not Two Lane Blacktop exactly, but they are racing for papers. And Dennis Wilson does star in it. Ok. He doesn’t… But either way, you need to open your eyes for “Open Your Eyes.”

If you are a little down in the dumps, prepare to be de-dumpified with the sunny sound of Sacred Paws’ new track “Everyday.”

Besides announcing a 2017 tour with labelmate and producer of his latest album Cate Le Bon (I’ll see you at Bowery in January! Let’s get pastrami at Katz’s afterwords! Date?) Tim Presley also released this hilarious video “Long Bow.” As I’ve been saying lately, I’d be happy if Cate produced all records and everything sounded 15% more Captain Beefheart. Hey, if you meet (meat) me at Katz’s, then we can have actual beef hearts! Synergy!

If you thought an album from a cellist on Thrill Jockey was gonna be anything less than staggeringly strange, then you haven’t been paying attention to Thrill Jockey. Marielle Jakobsons’ latest album is a slow moving, distorted dreamscape, just like her latest video for “Undone.”

It’s pretty obvious that A Giant Dog (as well as their newly-signed-to-Rough Trade Pub other band, Sweet Spirit) are trying their hardest to save rock and roll one catchy chorus at a time. Their latest video for “Jizzney” is further cementing them as one of the most fun bands around.

Hey! Some Jay Som! Talk about some super catchy indie pop, right? Oh right… You haven’t watched the video yet… Unless you’re cheating! You aren’t cheating though, right?

I cannot get enough of this new Weyes Blood record. Also, I’m just enough of a narcissist to assume you can’t either. Don’t you love it? The record I mean. I know, I am the worst.

Already a star in his native Norway, DFA is here to make sure that status carries beyond those borders with Nils Bech’s first international release. Electronic, strange, theatrical, this has a lot of things for a lot of people (just like this week’s blog post!)

If Swet Shop Boys aren’t a household name at your house yet, you better get ready. Our pal Heems (ex-Das Racist) and his SSB partner, the known for his recent acting turn in HBO’s The Night Of as well as the upcoming Rogue One, Riz Ahmed, have a debut full-length album. Cashmere is a staggeringly modern sounding rap album that is as culturally vital as it is infectiously amazing. Get a peak of their passion with the video for “T5.”

If there has been one constant on this here blog over the past few months, it’s been my lame “jokes.” If there is a second constant, it’s been a constant supply of strange, experimental videos from Gobby. Stay weird, Gobby!

Thanks for watching,
~John