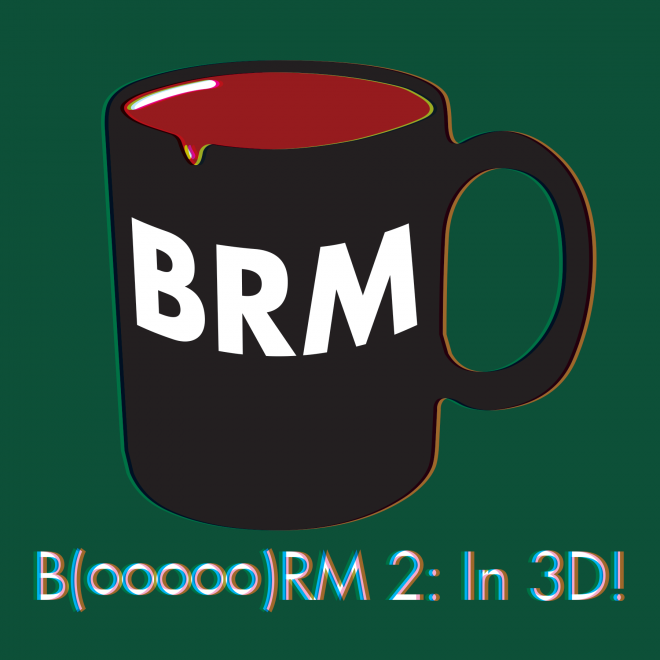 The blog comes at you each and every week. But never before have we come AT you like we are doing this week. That’s right, this week’s blog is in scary, Halloween-themed 3D! Cower in fear as our blood-filled mug slightly comes at you! Boo! Scary, right? If you’ll recall from last week’s blog post, we set the stage with a Halloween post so that week we could continue the trend with a Halloween sequel. So read along… if you dare!
It’s…
B(ooooo)RM 2: In 3D!
If you thought we started out strong last week with the scares, then wait until you get a load of the new Fever Ray video. Fever Ray is back, and more disturbing than ever. Seriously. We could end the blog this week with this video and be suitably Halloween-y. Check out “To The Moon And Back”… if you think you can handle it.
If David Lynch had directed Showgirls instead of Lost Highway, I think it would have come off a lot like the new Chelsea Wolfe video for “Spun.” So not only can Chelsea write the hell out of a goth-esque tune, she can also direct the hell out of a goth-esque video. Kudos!
This next video from Ka Baird is like a flute-driven fever dream. I gotta say, this is one strange Halloween.
The only thing scary about this new video from A Giant Dog is how goddamn hard A Giant Dog rock. Seriously.
And the scariest thing about this live performance from Jackie Shane is that if it wasn’t for our buds at Numero, we might have never become familiar with Jackie’s music. That is a very frightening thought!
Is there anything scarier than a skeleton? What about an Uncle Skeleton? Ok, maybe that sounds less scary, but I don’t know anything about your uncle, so maybe that conjures something scary in your mind I don’t even know about it. Peel your skin off along with Lee Ranaldo’s latest.
Ok… I’m starting to run out of Halloween-y juice here. I guess I was wrong when I assumed that the sequel was always better. Who knew? Either way, um… get scared… and check out this excellent Watter video. Um. Halloween! Watch out for snakes!
Now we’re talking! Black cloaked figures. Blood curdling screaming. This is the kind of unsettling, ambiguous ending I was looking for! Check out the new video from The Body & Full of Hell if you can stand to be as disturbed as you will be. Mwahahahaha!
And if those aren’t enough holiday-themed scares for you, then get ready for this. We combed through the BRM/RTP vaults to concoct a ghoulishly good Spotify playlist. Enjoy it here!
I want candy,
John
View All News
keep2porn.net shemale777.com vrpornx.net