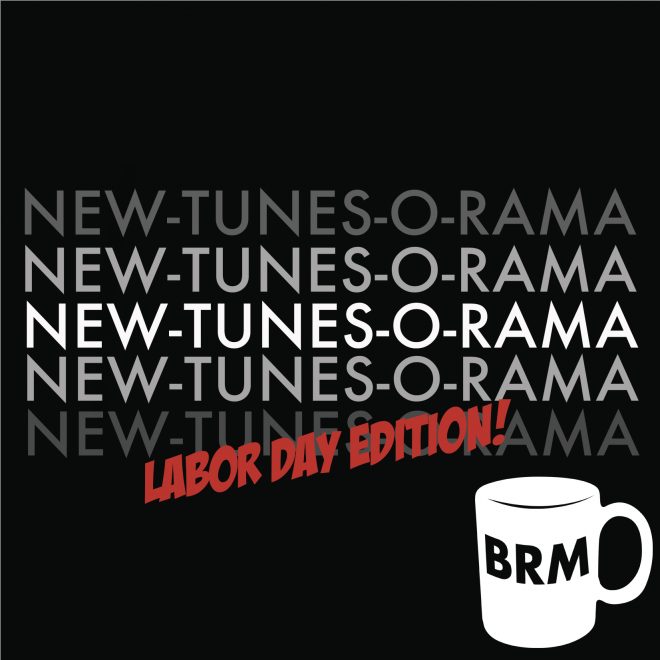 Ok. I know everyone is half out the door today with thoughts of the last long weekend of the summer. I know it so well, in fact, that I toyed with the idea of making today’s blog post a “clips episode.” You know, everyone’s least favorite episodes of their favorite comedy shows. Time was tight, so rather than spend the time writing a new episode, they would come up with a simple excuse to frame some “best of” clips (I’m looking at YOU Simpsons heyday writers!) But time waits for no man! Or more specifically, new music waits for no man! That’s right. I’ve got a heapin’ helpin’ of new tunes that just couldn’t wait to get to you next week. So let’s dig in-I swear, the long weekend will still be there after you check these tunes out!
– – – – – – – – – —————— – – – – – – – – –
To start, we have our first taste of the new Godspeed You! Black Emperor LP. That’s right. The whole thing is latched securely behind panic doors pre-release, so everything you are about to hear is everything we have heard too. It’s just like the old days! (lousy old days…)
On Monday, Merge released not one, but TWO new Hiss Golden Messenger tunes from his fast approaching new album. Think of it as a tonic for the toxicity of, well, just about everything right now. This is one feel good record. So start those vibes off positively with “Domino (Time Will Tell)” and if you haven’t seen what he’s up to on Instagram, you should do so. He’s asked his fans to cover one of his new songs, and everyone that does gets a free ticket to an upcoming show. It’s adorable. Also, I’m desperately waiting for a scat version to appear.
If you need a tune to get the party started this weekend, then look no further than Charly Bliss’ “DQ.” Also, if you need a Turtle Pecan Cluster Blizzard, then I also suggest looking no further than DQ.
If you were expecting anything less than a bold artistic statement from the first video for the new Liars record, then you haven’t been paying attention to the Liars career very well. Shame on you! Time to rectify that with “Cred Woes”!
I don’t know what’s weirder in this new doubleVee video? The Shining meets 2001 never-ending psychedelic scroll, the skinless animal robots, or the fact that the whole thing is kinda cute? I’ll let you decide as you check it out here.
Behind The Shadow Drops, the new solo project from ‘Taka’ Goto, is just as stunningly beautiful as you would expect anything from the mind of the man behind MONO (the band, not the single channel audio).
Coming soon from Drag City is Sapropelic Pycnic from Ka Baird. The best way I can think to describe the album is as follows: wack-a-doo psychedelic soundscapes featuring a fair amount of effects-heavy flute. Get a “buzz” going and check out the video for “Oneiric.”
If you’re like me, then you were very excited to hear about Watter when they first formed in 2014. After all, they feature members of Grails and Slint, two bands that I adore! So it stood to reason that I would equally adore Watter. Thankfully, I didn’t make an “ass” out of “u” and “me” and it was everything I hoped it would be. Judging from the first track off of their upcoming release, I stand to be satisfied again. Enjoy “Shadow Chase.” Hey! That’s what I was doing during the eclipse… oh right, that was last week’s blog. Sorry.
Finally, we’re gonna wrap thing up with a full EP of sweet, sweet soul sounds courtesy of our pals at Colemine Records. As he prepares a full-length album, check out this EP from Benjamin Porani. It’s soultastic!
Have a great Labor Day weekend everybody!
John
View All News