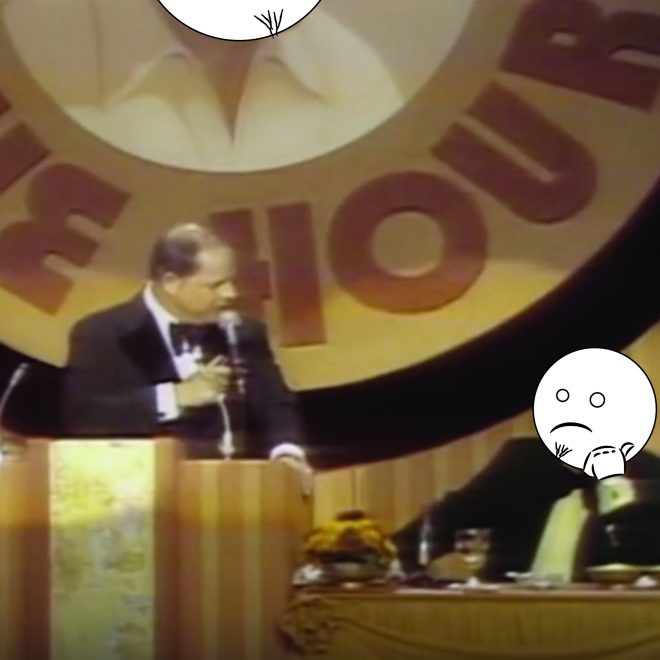 Look at you. What are you doing, ya hockey puck? You’re walking down the street staring at your phone. Don’t complain when you wind up as a stain on 7th avenue. The personality of a dead moth, this one…
What’s that? We’re a little more, um, snarky than normal? Ok, you may be right. Truth be told, we are still smarting a little over the passing of Mr. Warmth, Don Rickles, and wanted to pay a little tribute to him on this week’s blog. So does that mean we are going to making fun of this week’s songs and videos? Well, we sort of wanted to imagine what it would have been like if Don would have had some words to say about these new tunes. We think it might have gone a little something like this…
—
Earlier this week, Merge Records and Katie Crutchfield announced the new album from Waxahatchee, and there was much rejoicing! Out In The Storm is due on 7/14 and “Silver” is the first single from the new album. BTW the record is produced by Vinnie Bubatzzo… Sorry, I mean John Agnello! That guy has done more producing than Shawn Kemp!
—
Hot off the release of their new album Everyone Gets Exactly What They Want, Las Rosas released a new video for “Bad Universe.” This clip has more tchotchkes than my Aunt Rachel’s mantle.
—
Charlie Faye & The Fayettes made a little promo video to coincide with the use of their song “Coming Round The Bend” on the new Netflix original Girlboss (hmmm, I wonder how THAT happened? Spoiler alert: it’s not the only BRM/RTP tune to appear in the new series!). Dig into the tune below, and the last girl boss I had was Phyllis Diller on Hollywood Squares-and you know how that turned out!
—
Dion Lunadon (of A Place To Bury Strangers) continues to release action-packed singles in anticipation of his solo debut due this June. His latest howler is called, well, “Howl.” Speaking of howl did you see my brother’s wife? AWOOOOOO
—
Good Good Blood’s first album for Team Love Records comes out this friday, and he posted a new song on soundcloud in anticipation of it’s release. So enjoy the autumnal shimmer of “The Sunken Tree.” Sunken Tree? You should see the other guy!
—
If you’ve been celebrating 4/20 today, then the visuals for the new Trummors video for “Spanish Peak” are likely gonna vibe hard with your buzz.  By the way, “Spanish Peak” is the name of another thing Donald Trump wants to build!
—
Ryan Patterson, formerly of Coliseum, has a new project called Fotocrime. His first single is called “Always Hell” and is a doozy of an introduction. Speaking of Fotocrime… seriously, have you seen a picture of my brother’s wife?
Thanks for reading, ya dummies!
Don… sorry, I mean John
View All News