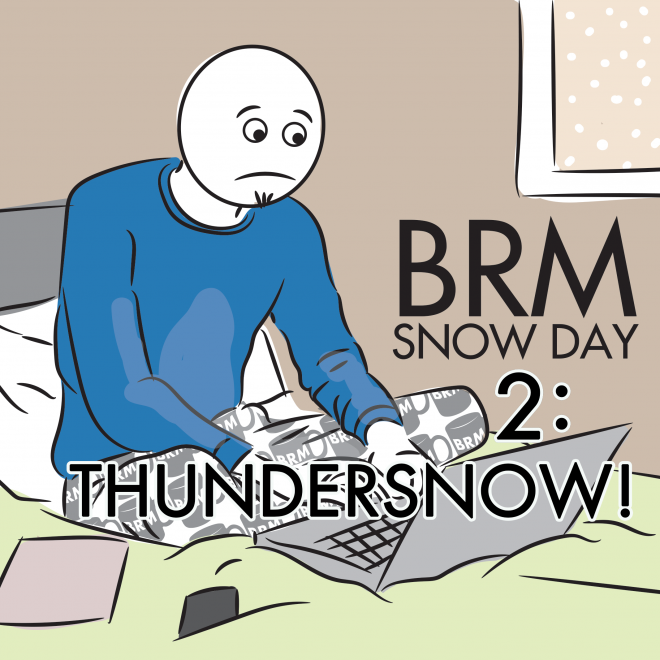 Seeing as how its been 70°+ since the last time I was able to use our BRM Snow Day graphic, I assumed it was retired for the season. But the rumblings began a few days ago.Or were the rumblings the dreaded “Thundersnow” (it is!)?  A nor’easter to end all nor’easters. As I write this in the morning yesterday (Wednesday 11:23 AM) it’s still unclear how much snow we’re gonna get. 4 inches? 2 feet? Who knows. It’s just starting to stick to the ground as I write this. Maybe I’ll go measure the snow after I’m done writing about this huge slate of videos.
How did we wind up with so many videos to write about this week? Well, it’s been a few weeks since we had the blog space to dedicate to videos, what with our Best Of Numero Group and patented Web Update blog posts over the last few weeks. So let’s dig in! (pun intended)
Lyle here–and I’m having (as of now) the dumbest snow day with my lovely spawn… so to make it through the day I’ve decided to add a drinking game to this blog.  Every time i write in Thundersnow you have to do a shot of something – be it whip cream from a can or alcohol…..I’ve been alternating. So start at the top and have fun!  You can save this blog and game for the next snowday (which will be probably when pollen is falling from the trees -“CANCEL SCHOOL”)! I’ll be the one in italics 😉
It would appear that everyone is as excited for the new Wye Oak album as they should be, and what’s not to love? Somehow Jenn and Andy just keep getting better and better. Check out the sublime “The Louder I call, The Faster It Runs” for evidence of that. Oh right… the snow theme… um… that sand kinda looks like snow, right?
Speaking of Merge artists that just continue to get better and better, we have the new video from the mighty Superchunk for “Cloud Of Hate.”Are “Clouds Of Hate” the ones making Thundersnow?
“After the storm breaks…” is how Jeff Rosenstock starts “Melba.” It’s almost like he knew I was gonna be writing about this vid today. For all of Jeff’s already known talents, I wouldn’t put ESP past him.
If you don’t know by now, sometimes James Alex of Beach Slang strips away the punk from his tunes and re-records them as Quiet Slang. Check out his insa-ballad-ing of Beach Slang’s “Dirty Cigarettes.” I’ll tell you what’s NOT quiet! THUNDERSNOW!
Eleanor Friedberger knows what up, which is “In Between Stars” and you know the answer to that is CLOUDS and they make THUNDERSNOW!
If you’ve ever thought to yourself “why do I read the comments section of anything, it’s always the worst” then you’ve never read the youtube comments for an of Montreal video. They are the best, as is evidenced by worm eater’s classic comment for the new “Plateau Phase/No Careerism No Corruption” video:

Here’s hoping worm eater is staying warm during this storm.
If you know anything about Paul de Jong’s solo career, then you won’t be surprised that his video for “It’s Only About Sex” is as disturbing and thought-provoking as you’d imagine it would be, like… um… a weather forecast from a ghost or something? Or snow that makes THUNDER? Does that count? SURE IT DOES (gulp)!
We couldn’t be more thrilled that Clint Michigan is back with a new LP. Now, is the new video for “Knickerbocker Street” a tad bit depressing? Yes. For two reasons. One, it’s a harrowing tale.Two, it is currently not thundersnowing!
Aaron Hemphill, formerly of Liars, is ready to release his solo debut as Nonpareils this April. Judging from the video for “The Timeless Now” its gonna be one enormous mind-eff of an album, and we can’t wait. Speaking of mind-effs,did you know that Thundersnow started back when Friendster was a thing and they became bffs!
Wanna take your mind of the memories of yesterday’sthundersnow? Then drown your sorrows on the joyous sounds of Sidi Touré’s “Heyyeya.” Seriously, is anyone having more fun making music than him? What other bands smile? It might just be Sidi and Weird Al.
If you to fetishize the industrial design of the mundane, then you are gonna flip for the new Hibou video for “Junipero Love.” Also, if you love great new tunes, then you’re gonna flip for the new Hibou video. Also, if you slip on ice you’re gonna flip. (that one was a groaner, sorry…)
Finally, If you’re looking for some hot demon robots to thaw you out, then check out this biker-heavy animated clip for the new Josh T. Pearson video for “Straight To The Top.” Also, if you are a biker and wanna go straight to the top of your biker gang, can I suggest “Thundersnow” as your biker nickname?
Handy with a shovel,
John
Thundersnow-drunk,
Lyle
View All News